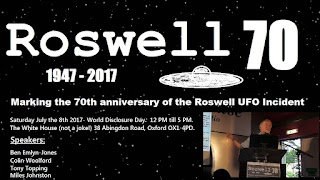 See here for the film: https://www.youtube.com/watch?v=y5kNYMWuBps.
And: https://www.bitchute.com/video/My1hiA1XT0eU/.
70 was the only public event outside the that marked the seventieth anniversary of the Roswell UFO Incident of July 1947. It took place at a pub in called The White House (not a joke!) and featured talks by Ben Emlyn-Jones, Colin Woolford, Miles Johnston and Tony Topping. See here for background: http://hpanwo-tv.blogspot.co.uk/2017/07/ufo-disclosure-2017-70th-anniversary-of.html. The fourth talk of the day was a mini-feature by an additional last-minute speaker, John Scarry. John can be contacted at johnscarry@gmail.com.
Posted by Ben Emlyn-Jones at 00:05