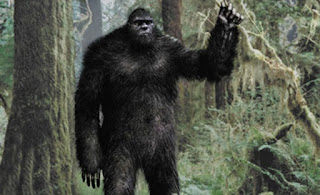 The idea that a large ape-like creature wanders the uninhabited wilderness areas of the world is widespread and accepted by most people, but could such a beast live in ? I've discovered possible signs of their presence near where I live. HPANWO TV investigates. Also included is an illustrated interview with Charmaine Fraser, a cryptozoologist who researches into the existence of Bigfoot-like creatures living in the . She became interested after encountering one of them personally in when she was a child. This interview was originally broadcast on this HPANWO Radio show, see: http://hpanwo-radio.blogspot.co.uk/2016/05/programme-187-podcast-charmaine-fraser.html.
See here for my report on the Scottish UFO and Paranormal Conference 2016 where the subject of the British Bigfoot came up: http://hpanwo-tv.blogspot.co.uk/2016/06/scottish-ufo-and-paranormal-conference.html.
Posted by Ben Emlyn-Jones at 17:43