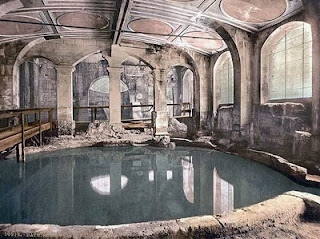 See: http://www.youtube.com/watch?v=_LychKd27T8
Today HPANWO TV visits the Roman bath-house in Bath. It is one of the wonders of Roman Britain. It was built in the 1st Century and thrived for over 400 years. It was built in several phases and the final bath-house was a huge building with a very high ceiling. It was more than a bath though; it was a place of worship. It featured a temple to the Goddess Sulis-Minerva, an amalgm of the Roman and Celtic water deities. But as the exhibition explains, the site was considered holy long before the Romans turned the place into an artificial site. It was worshiped by the pre-Roman people as a natural hot spring in natural surroundings. So why did the Romans have to stick buildings on it?
Related article: http://hpanwo.blogspot.com/2010/01/boudica-and-perennial-holocaust.html
This film is to be an accompaniment to the forthcoming review of the ARC Convention.
Posted by Ben Emlyn-Jones at 17:17